DJ Khaled Excites Fans With Photos Of Him & Diddy During An NBA All Star Weekend Link Up! DJ Khaled has a reputation of creating and maintaining high-level friendships in the hip-hop scene. Khaled has built up nothing short of high-profile bromances with some of hip-hop’s most powerful artists. This can be proved by one instance this past weekend when, the Khaled Khaled hitmaker recently spent a busy All-Star Weekend connecting with the legendary Diddy, and you can definitely be sure some mogul talk transpired.

Khaled could not contain himself making sure he brought back the memories of their time together. The “GREECE” hit maker took to social media and shared some pictures from their weekend get-together, lauding Diddy’s acumen as a negotiator. “Diddy is a great negotiator,” captioned Khaled. “So am I ! Swipe to capture us closing new deals.” He complements the image with another, in which he and Diddy can be seen taking a stroll by the ocean. “STILL IN THE MEETING,” he captioned, a contrast from the usual corporate meetings which tend to limit the average worker. All along, Khaled has always done his best coming out as someone who exudes confidence on a daily basis, a characteristic of someone who has come to learn the benefits of perseverance, hustle, and confidence. 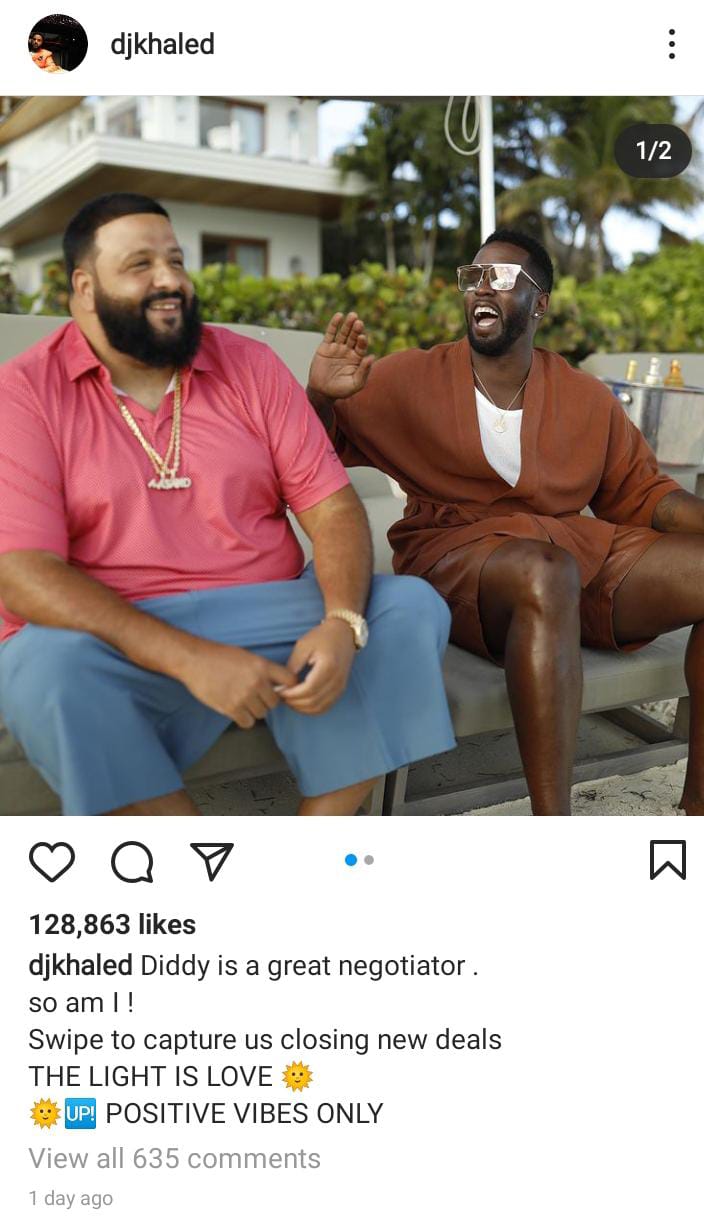 That said, Khaled could not end without highlighting the latter quality in his third and final photo of him and Diddy’s weekend link-up. “Confidence is [key],” he wrote, clearly ready for a quick dive in the pool. “Happy all star Weekend! billi & Diddy, the brand that’s worth a lot! THE LIGHT IS LOVE.
POSITIVE VIBES ONLY.” Check images of Diddy and Khaled’s big reconnection, as we await Khaled’s upcoming studio album Khaled Khaled, due out soon.

In case you missed it, DJ Khaled Gives Fans A Sneak Peak Into His Past With Inspiring Throwback