Diddy’s Handwriting Draws Everyone’s Attention After Gifting Chanel To Summer Walker! Music mogul Diddy gifted R&B sensation Summer Walker with a Chanel bag recently, but it was his handwriting on the note that got everyone talking. Of course the idea of a gift from music Mogul Diddy is something everyone would fancy and more so if the gift is from a luxury label such as Chanel. Well that came into reality when R&B artist Summer Walker recently received a bag from the French fashion house. The gift included a note from Diddy.

Diddy is known to have a history with Chanel that dates way back 2005 and beyond. This was confirmed during the 2005 MET Gala when Diddy showed up looking extra sharp. The event specifically featured a “House Of Chanel” theme for the night.

Diddy scribbled a note in a not so legible handwriting and this got him bashed by fans on IG on a photo posted by Shade Room. Moesha actor Marcus Paulk while commenting on The Shade Room this Diddy’s handwriting  “look like he was given her name location out to the police on 48 hours.” Another user notes, “it’s giving kindergarten.”

In case you can’t make out what he was trying to write, the note reads, “To Summer 1 of My Greatest Voices EVER Thank You Love Diddy.” The note is accompanied by the brand’s Wool Tweed & Gold-Tone Metal Large Tote in purple, black and blue out of the Métiers d’Art 2019/20 collection.

In case you’re  wondering, the gift  costs quite a penny at just under $5,000 and it’s more than likely sold out. What’s clear is that when one gives good presents, no one cares what the gift note looks like anyway.

Check out Diddy’s note to Summer Walker below; 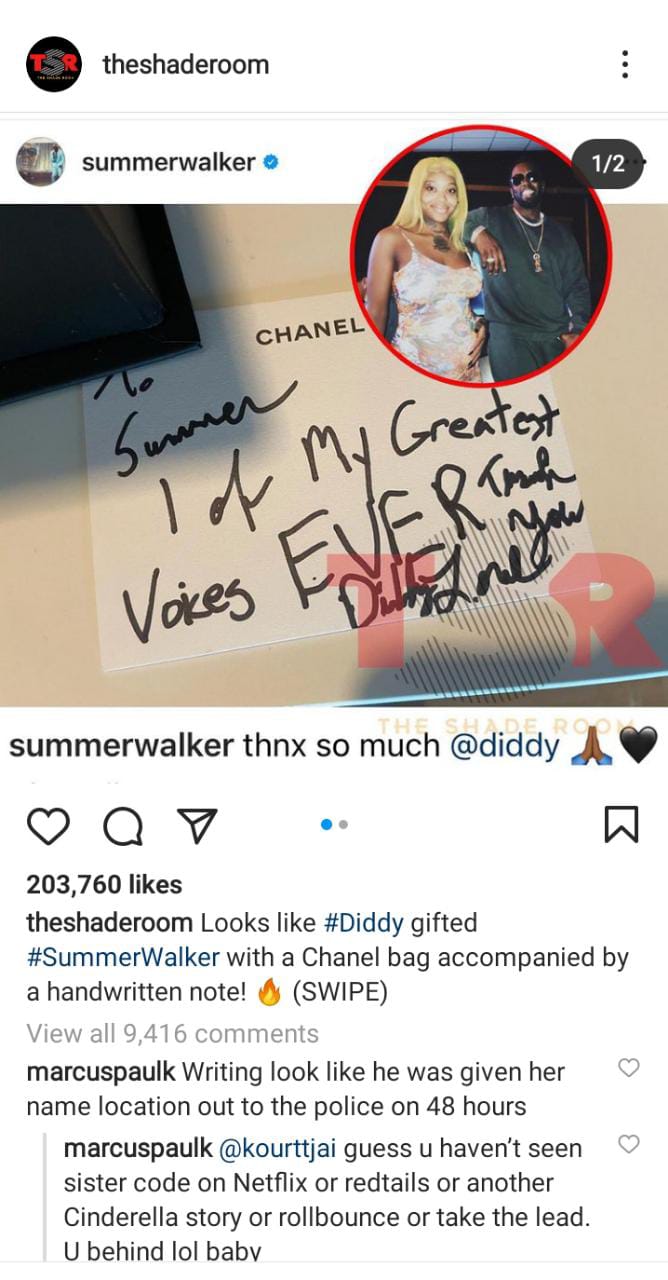 In case you missed it, The Game Claims He’s The Best Rapper From Compton, Better Than Kendrick Lamar.

The Game Claims He's The Best Rapper From Compton, Better Than Kendrick Lamar