How Meek Mill And The REFORM Alliance Are Helping Change VA Probation Laws! Meek Mill’s prison reform organization, the REFORM Alliance, has helped secure yet another legislative victory in Virginia. In a collaborative effort with Justice Forward VA, an American Conservative Union, and Faith and Freedom, the groups have seen the enactment of HB 2038. The new law in Virginia will introduce caps on probation terms by putting a limit on adult probation sentences to a maximum one year for misdemeanor offenses and 5 years for felonies. HB 2038 will take effect on July 1, 2021.

Meek Mill actually put the whole bill in motion back in December through a series of tweets with Justice Forward VA seeking ways on how they could help bring about a change.

“This legislation is a meaningful step forward toward building better pathways for Virginians stuck in the probation trap, and sets a positive example for what can be done in other states across the country,” stated  REFORM CEO Robert Rooks in a statement to Complex. “We’re thankful for the support behind HB 2038 that will reunite families, prevent unnecessary incarcerations and give life back to thousands of Virginians.” 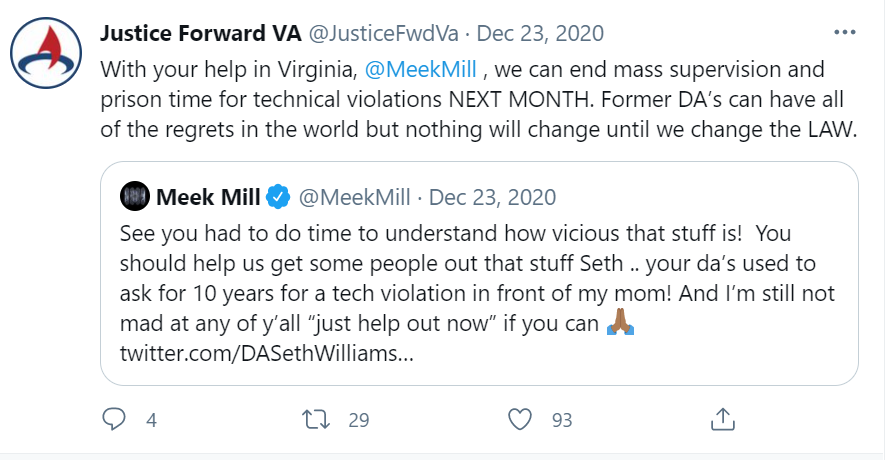 In a statement to Complex, Virginia delegate Don Scott, who played a pivotal role in passing the bill further, hailed the rapper for bringing light to the broken justice system.

I’m dropping the bill in the General Assembly this month to end imprisonment in Virginia for technical violations of probation. It’s “levels” to this thang. @MeekMill and @JusticeFwdVa -y’all coming to the Zoom release party? https://t.co/fBZjqrXQqA

“When people directly impacted by probation and our broken criminal justice system, like Meek Mill and others at the REFORM Alliance, get behind those of us fighting to make a difference on these issues, we can create substantive and meaningful change,” the Virginia delegate who authored the bill stated.

Meek Mill helped establish the REFORM Alliance to help address issues in the criminal justice system that leave people on parole for years, resulting into more expenses for the state, and encouraging a trend that sees individuals going back to jail. The organization also plays the role of helping individuals returning home from prison to find their footing back into society.