Ray Of Hope As Dr. Dre Shares Encouraging Message From Hospital – DR DRE, a US based Celebrated Hip-Hop Producer and rapper is doing well in ICU after suffering “brain aneurysm”

The legendary Hip-Hop Producer and rapper has broken his silence since he was hospitalized Monday (January 5th) after suffering a “brain aneurysm” in Los Angeles.

The rapper whose real name is Andre Romelle Young, fell ill Monday  and was rushed to Cedars-Sinai Medical Center in Los Angeles. He was then admitted to the Intensive Care Unit (ICU) where tests are currently being done to determine the real cause of his illness.

According to a post he sent out from his Instagram, there’s a glimmer of hope after he was reportedly in critical condition prompting immediate admission in ICU. The message went as follows,

Below is a screenshot of the message as seen from his Instagram. 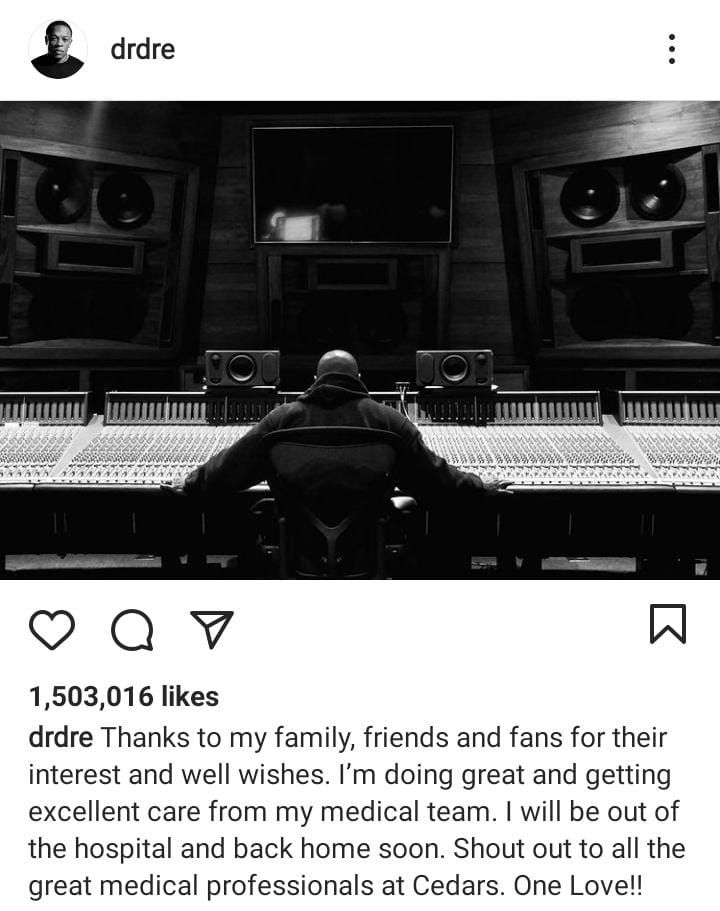 Reports say he is in a stable condition but the doctors are still checking to diagnose the possible cause of bleeding in his brain.

The news come amid a divorce duel in court with his estranged wife Nicole Young. The couple are battling it out over a fortune estimated to be worth 850 Million US Dollars.

Nicole claims Dr. Dre forced her to sign a pre-nuptial agreement which would prevent her from accessing his vast fortune. These include his investments, businesses and revenue from the sale of his Company Beats By Dre.

Social media was abuzz with messages of goodwill as fans as well as his industry friends wished him a speedy recovery. 50 Cent, Snoop Dog and Ice Cube are among those Hip- Hop artists who were not left out in this regard. We too wish, Dr. Dre a quick recovery.