According to Pitchfork, California court documents which became public revealed that Nicki will have to part ways with over $450, 000 to Tracy Chapman. All legal expenses relating to the case will also be covered by the same amount.

The lawsuit was filed by Chapman back in 2018 following the rapper’s alleged unlicensed sample of “Baby Can I Hold You” in the leaked song “Sorry,” Featuring New York Rap Legend Nas. The Lawsuit came after Chapman blocked Nicki’s request for “Sorry” ahead of the release of her fourth album Queen. The track was “leaked” by DJ Funk Flex in 2018 when he played it on Hot 97.

Nicki’s admission that Chapman had turned down her request led to  a social media Campaign which lasted one day. This however, didn’t add any positive impact on her case.

This is how she tweeted back then. 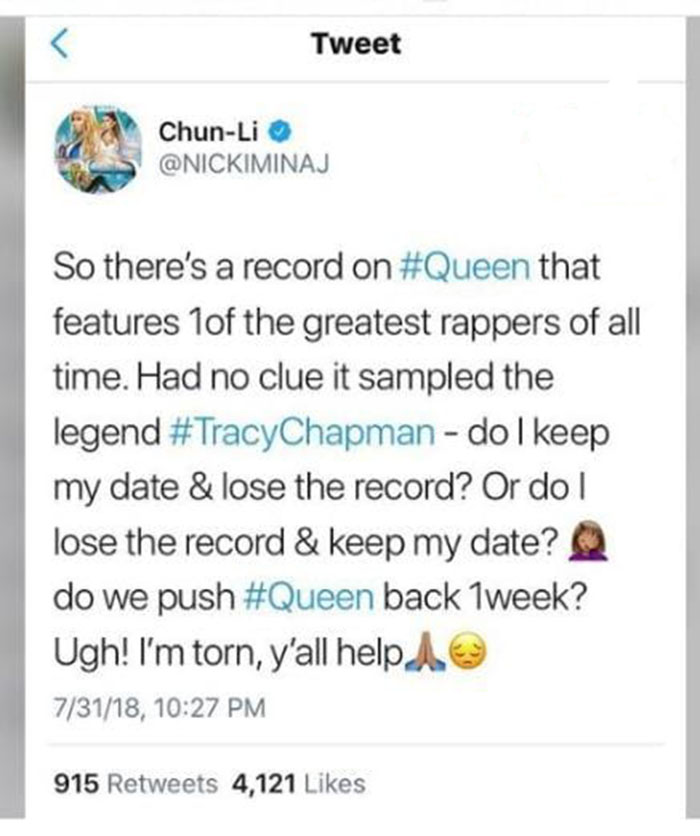 There was a glimmer of hope for Nicki, in September 2020 though, when US District Court Judge Virginia Phillips ruled that Nicki had not committed copyright infringement involving Chapman’s “Baby Can I Hold You” basing her judgement on grounds of fair use provided there was no distribution.

In her decision, Judge Phillips wrote “uprooting” the common practice of letting artists experiment privately “would limit creativity and stifle innovation within the music industry.”

Nonetheless, the judge allowed the case to proceed to trial on the question of how the song had leaked.

In her statement on Friday January 8, Chapman said she was happy with the outcome, “which affirms that artists’ rights are protected by law and should be respected by other artists,” She said.

“As a songwriter and an independent publisher I have been known to be protective of my work,” Chapman added. “I have never authorized the use of my songs for samples or requested a sample. This lawsuit was a last resort.”

Minaj’s lawyer Peter W. Ross, had this to say when asked for comment.

“We settled for one reason only. It would have cost us more to go to trial.”

With the case now behind her, Nicki is not off the hook just yet as she still has other legal matters pending in court. The rapper has been sued for $200 Million For Her Hit ‘Rich Sex’ by a Queens rapper by the name Brinx Billions who claims he had written the entire song for her.